In the second half of the RFID TTJ episode we covered how to clone or spoof an existing RFID tag. This was partially to expose the security flaws of RFID, but also because it can be very useful. I’ve stayed in a few apartments now that require an RFID tag to get in and out of the main gate. Sometimes you’ll end up getting only one or two RFID tags for the main gate when you have more people living in the same apartment. It’s also inconvenient if you have friends that come over often and you have to let them into the gate every time.

Almost all of this information and work was put together by Micah Elizabeth Scott over at scanlime.org. We simply experimented with the technology and found what works best for us. 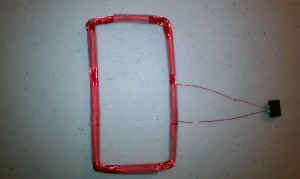 END_OF_DOCUMENT_TOKEN_TO_BE_REPLACED

I’ve been a college student for a few years now and one of the first things that I hacked together while staying in a dorm room was an RFID (Radio Frequency Identification) lock. I was always in a rush to get in and out of my room and having a wireless key made it that much easier. The challenging bit was that I needed to be able to attach it to my door without modifying any of the hardware and I also wanted it to be hidden from the outside. My first prototype was pretty rough, but over the past year I’ve refined my design and finished a minimalistic circuit board. 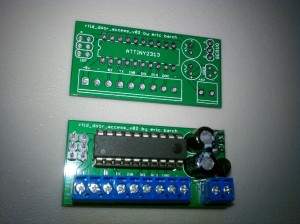 END_OF_DOCUMENT_TOKEN_TO_BE_REPLACED

In this episode of TTJ we show you how to build your very own RFID door lock using our open source plans. We also take it to the next step and show you how RFID tags can be read and duplicated.

Make sure to get all the details and source code in the episode writeups:

In this shorter half-episode, we recap some of the cool things featured at Maker Faire Detroit 2011 and a bit more video of the Mantis robot driving around.

Drive for Innovation talks with us at Maker Faire

Drive for Innovation – All hail Mantis, the open-source robot

We’ve got more videos/projects on the way, so stay tuned!

I’ve been playing around with some ideas for an Arduino/Netduino robot control system the past few months. I knew that I wanted to be able to control my robots from an Android phone, PC, or any other WiFi enabled device. I also knew that I wanted the system to be small and simplistic, but also powerful and extensible. The reason I went with an Arduino (Ethernet Pro) or a Netduino Plus for the controller was the low cost, ease of programming, and the embedded ethernet port. I coupled the onboard ethernet with a wireless router so that I could connect and transmit data to the robot wirelessly. Here are the results of our first robot build with this system. The robot was affectionately named Mantis. 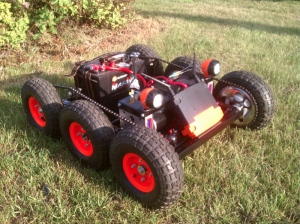 END_OF_DOCUMENT_TOKEN_TO_BE_REPLACED

In this episode we show how to build your own open source robot control system using IPGamepad and other open source software we’ve written. Make sure to visit the project page at ipgamepad.googlecode.com. We also show off our latest robot called Mantis. By building the controls around a Netduino, the robot is extremely extensible and can receive commands from any WiFi enabled device.

A project write-up is on the way and should be hitting the site in the next few days. Until then, check out the Google Code page for all the details of the control system.

The Tech Junkies
Blog at WordPress.com.